Plans for the Arena at Filton have been recommended for approval

Plans for the Arena at Filton have been recommended for approval

Should the Arena get built it will become the third largest arena in the UK ( after Manchester Arena and the O2 in London ) and will seat 17,000 people.

Malaysian investment firm  YTL has said the “unique seating bowl” design of the arena would allow for flexible capacity – ranging from 4,000 to 17,000, which could attract a variety of events including theatre, comedy and live music. Their plans also include creating a new pedestrian walkway and transforming the other two hangars into a ‘Festival Hall’ and ‘The Hub’

Festival Hall would be a flat floor event space for conventions, exhibitions and working in tandem with the arena to attract large scale events. Meanwhile, The Hub, would be the 365-day part of the venue and would include a visitor attraction, leisure, workspace and food and drink.

This is the fourth attempt to get an arena built in Bristol and despite National Planning Policy stating that priority must be given to sites in or close to the city centre,  YTL has argued there are no other sites suitable for what they want to build – and Bristol City Council’s officers have agreed with the firm’s assessment.

At the end of last year YTL submitted four separate planning applications for the project to both Bristol and South Gloucestershire councils. They include the change of use and alterations to the Brabazon hangars, construction of a pedestrian bridge over the railway line, demolition of existing buildings around the hangar, alterations to the Charlton Road / West Way road junction and temporary car parking provision.

While the arena would sit within the Bristol City Council boundary, the car parking provision located on the northern side of the railway line, would be located in South Gloucestershire within the footprint of the new Brabazon neighbourhood.

If approved, the arena would sit opposite the new Brabazon neighbourhood on the north side of the railway line where planning has already been granted to build 2675 new homes by sister firm YTL Developments.

Plans for the Brabazon site also contain a number of parks and green spaces, cycle lanes, allotments and even a lake for wild swimming. In addition there are due to be three new schools, a health centre, a university campus and 62 acres of employment space.

Bristol and South Gloucestershire councils will also be jointly responsible for making an additional £100M worth of infrastructure improvements around the Filton area. This would include a Temple Meads to Brabazon station rail link and a new metrobus route which will go directly through the new Brabazon neighbourhood. These two projects have already received approval and will go ahead whether an arena is built at the site or not.

If the proposals for the Arena get the go ahead, YTL plans to open the doors to the public in early 2023. 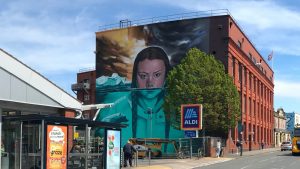 Climate activist Greta Thunberg is set to take part in a climate strike in Bristol this Friday (February 28).

The Nobel Peace Prize nominee is set to speak on the College Green at 11am and then march around the city centre as part of an event hosted by Bristol Youth Strike 4 Climate, a movement started by the 17-year-old herself.

Greta announced her visit on Twitter last weekend when she wrote  “Heading for the UK ! This Friday, the 28th, I’m looking forward to joining the school strike in Bristol! We meet up at College Green 11am. See you there!”

Event organisers said they’re unsure how large the strike will become, as it was organised at short notice.
Billie Eve Steward from Bristol Youth Strike 4 Climate, ”We don’t really know how big it’s going to be. Normally we have a month or more to publicise it. Last September we had 15,000 people, but this has the possibility to be our biggest strike yet because everyone’s going to want to hear Greta talk.”

The Bristol event follows one held in Hamburg last Friday, where more than 60,000 people are believed to have attended.

Police who are expecting very large crowds have issued warnings about severe disruption to travel across the city. The police have also expressed concerns about the safety of those taking part in the rally, especially children, highlighting the danger of large crowds with trips, falls and crushes possible.

Two years ago, Bristol declared a climate emergency, becoming the first UK authority to do so. As part of the declaration, Bristol City Council pledged that the city would become carbon neutral by 2030, 20 years earlier than previously agreed.