Bristol has been repeatedly hit by unusually high spring tides this week. Tidal variations are very much a way of life for Bristolians with the River Avon flowing through the heart of city.

With the Bristol channel having a tidal range of 14m  – the second largest tidal variation in the world after Bay on Fundy in Canada (16.3m),  the River Avon often appears ’empty’ or ‘full’ as it runs under the Clifton Suspension bridge.

This week the spring tides have been so high that many roads have been flooded including the Portway which runs alongside the River Avon under the Suspension Bridge.

Road closures have been in place during the hours of high tide but everything is expected to return to normal during the weekend. 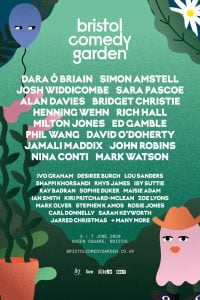 The line up for the 9th Bristol Comedy Garden is announced

One of the most eagerly awaited Bristol events of the year is set to return to Queens Square 3rd – 7th June.

This is the 9th year of the Comedy Garden and the organisers are promising even more to do in the comedy garden with street-food, craft beers and lots more all set in the beautiful Queen Square.

For details of the line up and tickets click here.

Return to all news

Return to all news